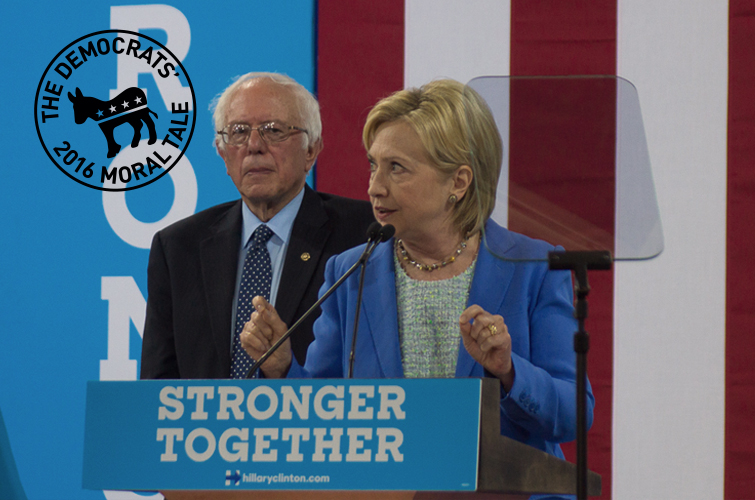 Bernie Sanders and Hillary Clinton in a meeting on the 12th of July, 2016 © Marc Nozell (edited by Jet d’Encre)

This series of three articles describes a moral narrative that makes sense of the 2016 U.S. presidential election. This moral understanding is characteristic of parts of the American left, notably some Bernie Sanders supporters and Green Party voters. The story has three parts that correspond to the three phases of the election year: Hillary Clinton and the Democratic Party rigged the primaries, they were punished for this by losing the general election and they then refused to take responsibility for their loss. The first leg describes how Clinton’s victory against Sanders in the Democratic primaries came to be the original sin that set the narrative in motion.

The worst has happened

Donald Trump is now the 45th president of the United States of America. In 2016, the Republican Party1 reached a level of power that it hadn’t held in the American political system since 1928. At the federal level The GOP (Grand Old Party) controls the presidency, the Senate, the House of Representatives and now the Supreme Court. At the level of the states, it holds 33 governorships and controls 32 legislatures.

In the run up to November 8, 2016, it seems that people who opposed conservative policies and who were appalled by Trump’s personality and rhetoric might have managed to look past their divisions in order to try to secure the presidency. It is remarkable that the clear and present danger of a Trump presidency was not sufficient to push progressive political groups into a pragmatic union. In fact, divisions even deepened between the left and the center.

This growing dissension was accompanied by the emergence of a narrative that integrated political developments as they unfolded while giving them a moral significance. A tale of sin and punishment grew in strength and ushered out narratives of a non-moral nature. This narrative explains why many voters on the American left could not bring themselves to support Hillary Clinton against Donald Trump.

Prior to 2016, a casual political observer would have thought that Hillary Clinton would march through the Democratic Primary season without any real opposition. Instead, Bernie Sanders turned out to be a particularly tough and resilient opponent.

Clinton was the preferred choice of the elites of the Democratic Party. This is in part because Sanders is an independent senator and not technically a Democrat. As early as February 12, 2016, Clinton was already leading in the superdelegates2 count by 362 to 8. At the end of the primaries she had the support of 602 superdelegates while Sanders only had the support of 48. Clinton was also ahead in the pledged delegates count during the entire primaries, ultimately winning the popular vote by 3.7 million votes.

The early and overwhelming support that Clinton received from the superdelegates is the original sin that she and the Democratic Party committed. The perceived unfairness of the support she received from party elites delegitimized her victory in the eyes of many Sanders supporters. The party was accused of being run by elitist oligarchs who rigged the primaries in order to suppress Sanders.

Despite being very strong and generating a lot of enthusiasm, Sanders’ campaign never caught up with Clinton’s. Sanders and his supporters were thus confronted with increasing odds of defeat. This lead to a tension that had to be resolved: either Sanders’ supporters recognized Clinton’s victory (as he did) or they denied it. How could a very inspiring candidate who drew enormous crowds to his rallies be losing? The primaries had to be rigged.

The Democratic National Committee (DNC), the national governing body of the Democratic Party, became the target of various conspiracy theories. The DNC was accused of purposefully scheduling TV debates between the candidates at times of low viewer audience. It was also accused of falsifying the results of the primaries. The belief in vote rigging was so widespread that 78’000 people signed an online petition on change.org calling for an investigation into Hillary Clinton and the DNC for electoral fraud.

Even when the results were not rejected, Clinton’s increasingly likely victory was denied. On April 28, 2016, a private blog claimed that Sanders was still certain to win the majority of delegates. The post offered dubious delegate math calculations to support this claim and was shared 114’000 times on social media.

There was anger at the mainstream media (MSM) for reporting that Sanders could not win anymore. On June 6, 2016, Associated Press announced that Clinton had enough superdelegates to win the nomination and thus declared her the presumptive nominee of the Democratic Party. AP came under fire from the Bernie Sanders campaign itself for publishing this news the night before 6 primaries were due to be held, including California’s. AP was accused of declaring Clinton the winner by decree and even of trying to help her by influencing voters: “the AP called the Democratic race for Hillary Clinton on Monday, the night before a set of important primaries, including California. Does anyone doubt that calling a race over has the effect of depressing voter turnout?”

Conspiracy theories denied Clinton’s victory in the California primary, where she defeated Sanders by a larger margin than expected.3 One website, justicegazette.org claimed that Sanders had won in California but that two thirds of his votes had not been counted. Incredulity was also expressed in Counterpunch: “Where are all the Missing Primary California Votes?”

Clinton came to personify the arrogance, moral depravity and corruption considered to be rampant in the party’s elites. This attention to her character on the left parallels and borrows from the way she was portrayed by the Republicans.

From “crooked Hillary” to “hawkish Hillary”

Hillary Clinton was perceived to be Barack Obama’s natural successor as the Democratic candidate for the White House. The GOP had thus plenty of time to mount an attack against her political record. This came in the form of the Benghazi investigation. The Republican controlled House of Representatives investigated the response of the US State Department to the terrorist attack that killed the US ambassador in Libya on September 11, 2012, when Clinton was Secretary of State.4 It published its final report in June 2016, in the middle of the election year.

In the course of the Benghazi investigation it was discovered that Clinton had been using a private email server rather than a government email account, in violation of the rules of the Department of State. This caused a separate investigation to be lead by the FBI into her use of emails.5

The Benghazi and the email investigations are the origins of Clinton’s characterization as a criminal by Republicans. Donald Trump referred to her as “crooked Hillary” in his campaign speeches and his supporters often chanted: “Lock her up!” at his rallies. During the second presidential debate, Trump even threatened to appoint a special prosecutor to investigate her if he was elected.

The perception of Clinton as someone who could not be trusted, who was up to something, who was a cheater and a criminal seeped into the left and found its own expression there. The left did not only borrow from Republican propaganda, it also developed its own characterization of her as being hawkish on foreign policy.

A couple of events explain how Clinton got her aggressive reputation on foreign policy. The first event was her support for the invasion of Iraq. In 2002, when she was a senator, she voted in favor of the joint resolution that authorized George W. Bush to invade Iraq.6 The second event was her support for military intervention in Libya in 2011. As Secretary of State, she convinced president Obama to intervene against Qaddafi.

Support for military intervention in these two instances strengthened Clinton’s image as someone who craved armed conflict and American interventionism. This characterization is apparent in multiple occurrences. The journalist Glenn Greenwald described her as the: “Wall Street-enriched, multiple-war-advocating, despot-embracing Hillary Clinton”. He also described one of her foreign policy speeches in the following terms: “she proceeded to deliver exactly the speech one would expect, reminding everyone of just how militaristic and hawkish she is”. Susan Sarandon also expressed the same view: “She did not learn from Iraq, and she is an interventionist, and she has done horrible things, and very callously, I don’t know if she is overcompensating or what her trip is (…) I think we’ll be in Iran in two seconds.”

Clinton came to be considered a criminal on the left and on the right, accused of lying about the Benghazi attacks, about her emails and of rigging the primaries. In addition to this, the left considered her to be a dangerous war-mongering interventionist who might lead the US into a new world war if elected. Thus she was not only immoral but also dangerous.

Bernie Sanders suspended his campaign on June 16, 2016, without either conceding to or endorsing Hillary Clinton. He only endorsed his opponent a month later, on July 12th, 2016 after being able to influence the writing of the Democratic Party’s Platform.7 Several of the policies that were essential to Sanders became the policy of the Democratic Party, such as an increase in the minimum wage, more environmental-friendly policies, free education and universal healthcare.

The merging of the views of both campaigns in the party platform did nothing to alleviate the moral narrative of the primaries. Bernie had fallen victim to the treachery of Clinton and the Democratic Party’s elites. The next article discusses this purely moral understanding of the primaries and explains why a minority of Sanders supporters refused to switch their vote from Sanders to Clinton and preferred to vote for a third-party candidate instead.

1 The GOP is conservative, opposed to what it calls “big government”. It believes in a reduction of social welfare and limited regulations and taxation. This opposition to big government is not unconditional: the Republican platform defends conservative Christian values such as an opposition to marriage equality and abortion. Donald Trump added a layer of populism to Republican conservatism. His campaign was characterized by an anti-immigrant, anti-Muslim, anti-press, pro-torture, Putin-friendly and misogynistic rhetoric.

3 Although the margin of her victory decreased from 12% to 7% as the votes were counted over the next five weeks.

4 The House Select Committee on Benghazi investigated from May 2014 to December 2016. Although the State Department was heavily criticized for its response to the attacks, no real wrongdoing by the Secretary of State was discovered.

5 The FBI investigation into Hillary’s emails lasted from July 2015 to July 2016. James Comey ended the investigation without an indictment of Clinton but described her actions as “careless” with regards to classified documents present in the emails.

6 The majority of both parties voted in favor of the Iraq war but Bernie Sanders, an independent senator, opposed it.

7 The Democratic Party platform publicizes the Democrats’ principal positions and policies. It is drawn up every four years ahead of the presidential election.