Beautiful memories of “The Battle of Algiers” 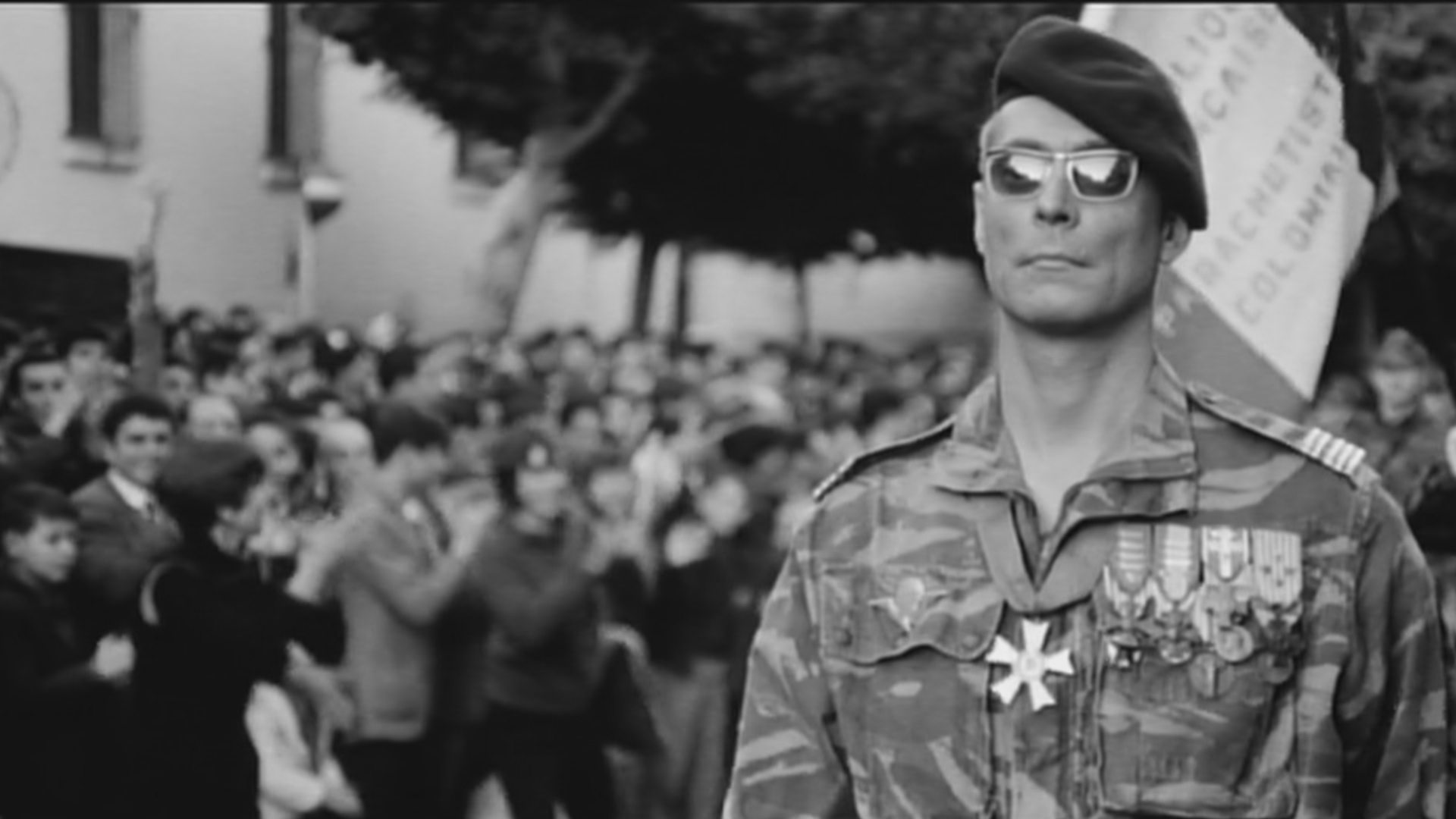 Gillo Pontecorvo’s “The Battle of Algiers” (1966) was the first film to tackle the Algerian war head-on, soon achieving international success for the perspective it offered on this painful and delicate topic. With his documentary “The Battle of Algiers: a Film in History”, Malek Bensmaïl walks us through the making of the cult film. By doing so, the Algerian film director enriches our understanding of how history and cinematographic art can work together as memorial tools.

The two films will be screened and discussed this weekend as part of the 20th edition of the Geneva Black Movie Festival. Here is the interview conducted by Emmanuel Deonna with Malek Bensmaïl.

The Battle of Algiers (1966) is a major fiction film, important for historians and for film historians alike. Screened this week as part of the twentieth edition of the Black Movie Festival in Geneva, The Battle of Algiers: a film in history, by Malek Bensmaïl (2017), reminds us of this in a sober and elegant way. Based on an extensive and meticulous documentary odyssey, Malek Bensmaïl’s work stimulates critical thinking on history and memory. His movie is a co-production of Hikayet films (Algeria), Ina (France) and Imago (Switzerland). It should be noted that Imago Film recently released another documentary on a similar theme, Choisir à vingt ans, by Villi Hermann, which focuses on the trajectories of French draft dodgers in Switzerland during the Algerian War.

The story of a success

Gillo Pontecorvo’s film was the first to tackle the Algerian war head-on and to achieve international success with this painful and delicate topic. Awarded a Golden Lion in Venice and nominated for three Oscars, The Battle of Algiers was banned for a long time from French cinemas. Throughout the 1960s and 1970s, the film fascinated many anti-colonial fighters and activists in Africa and Latin America. It also won the admiration of the Black Panthers who praised it publicly. Somewhat paradoxically, the film also arouses keen interest among anti-terrorism strategists. As Bensmaïl reminds us, The Battle of Algiers is studied to this very day by counter-insurgency experts within the Pentagon. Influenced by neo-realism, Pontecorvo worked from a script by Franco Solinas, adapted from the book by Yacef Saadi. Hero of the struggle for national independence, director of the production company Casbah, Saadi also plays a part in the film.

Malek Bensmaïl went to meet the film crew in Rome and Algiers. With the help of historical advisors for each country, he also documents his meetings in Paris and New York with players from the movie industry and other professionals concerned with the movie’s fate and legacy. Pontecorvo’s crew was made up of Italian and European professionals, but above all Algerian technicians and actors. The latter gave very precise indications to the director, suggesting ways of improving their acting. The actors from Algiers were replaying what they had just experienced in real life. As the interviews conducted by Bensmaïl eloquently illustrate, Algiers participants in the shooting were contributing, both concretely and symbolically, to the birth of the independent Algerian cinema. They also managed to lend to a purely fictional film – not one single piece of archival footage was used by Pontecorvo – a formidable degree of plausibility, unmatched in the history of cinema. 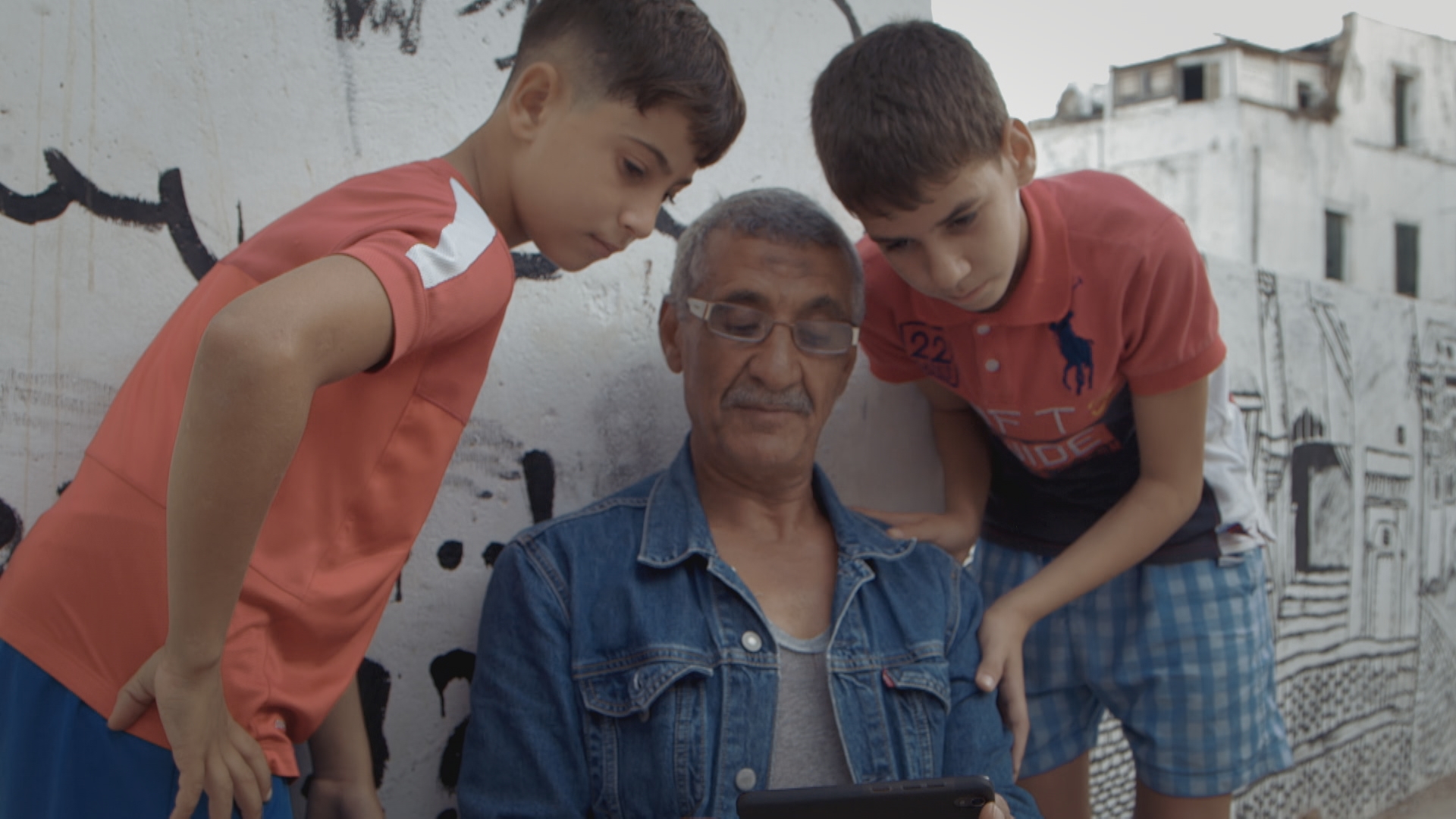 This striking impression of authenticity derives from the fact that Pontecorvo is grounded in the tradition of Italian neo-realism as well as his decision to draw on the documentary genre. “The granular photography, the short focal lengths, the shoulder camera, the black and white, all this links Pontecorvo’s work to Italian neo-realism. Pontecorvo also immersed himself completely in the topic. He closely studied French newsreels from that time and strove to replicate them faithfully,” Bensmaïl emphasizes. The Algerian filmmaker has chosen not to use any excerpts from La Bataille d’Alger: “Pontecorvo’s film is in itself emotionally so powerful. Using excerpts from it would have obscured my own work. I also wanted to leave room for the imagination for those who haven’t seen Pontecorvo’s film”.

Bensmaïl’s dialogue with the local participants in the film provides much valuable information about the atmosphere in Algeria at the time, particularly in the Kasbah of Algiers. It helps us reflect on the political and symbolic issues surrounding Pontecorvo’s film, both those of yesterday and those of today. Pontecorvo’s film drew much of its appeal from his particularly convincing way of presenting the Algerian resistance. However, it won global acclaim because of its subtle attempts to come to grips with the extreme absurdities and atrocities inherent in war and violence, in particular the use of torture. As several Algiers interviewees deplore in Bensmaïl’s film, liberation from France’s colonial domination did not fulfill the grand political promises of Algerian independence. A process of collective mourning and reconstruction is actually still under way in Algeria as well as in France. In that context, Bensmaïl’s film undoubtedly enriches our understanding of history and of the processes at work in the construction of memory. 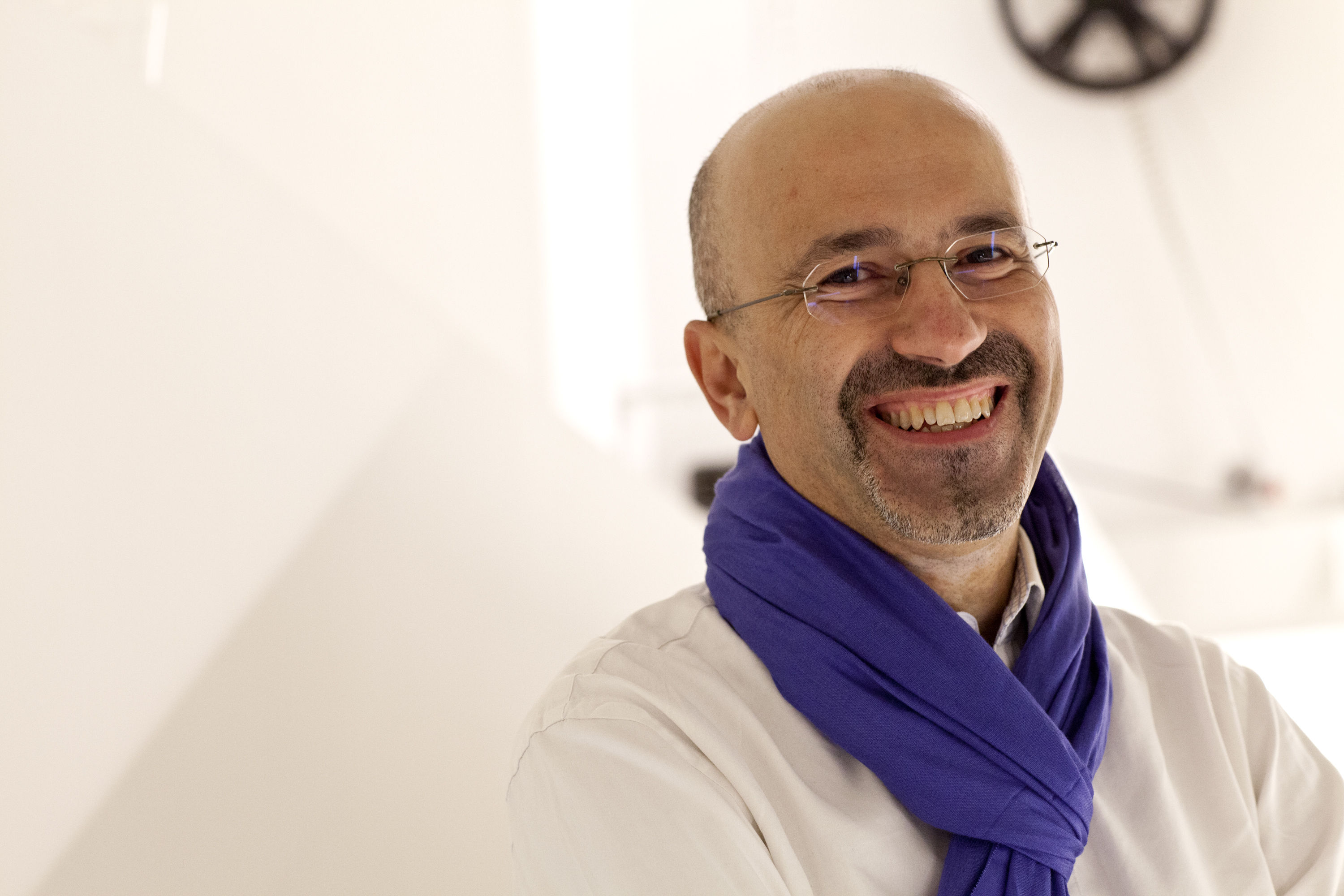 How did you come up with the idea for this film?

Malek Bensmaïl: All children in Algeria were familiar with this movie. We watched it every year when it was screened on national television, especially on November 1 during the celebrations of the Algerian War and the national revolution. We were watching the film on the only television set that we had. We knew the dialogues of the movie by heart as we used to recite them on the playgrounds. We would play the scenes involving commandos, paratroopers and torture. The Battle of Algiers also had a decisive influence on Algerian cinema. I even think that the film has « triggered » a certain representation of the Revolution in Algerian cinema. From the very beginning, when I started to work as a filmmaker in the 1990s, I have documented this period. I think it is important to reflect upon Pontecorvo’s film and its reception. « The Battle of Algiers » still very much resonates today in Algeria. Our society is at a crossroads. Some directions point us towards the West, some towards the East and others specifically link us to Algerianness. Language, religion and other social, political and cultural factors are all at work here and are setting the course for our future.

What was your main concern during the shooting?

MB: I wanted to explore the complexity of the Algerian question; to discuss the way we look at ourselves as Algerians and the way cinema looks at us. I have tried to understand how we have also come to perceive ourselves through the eyes of others. The fight for freedom and national liberation, which is at the heart of the Battle of Algiers, is important. But there is a risk, depending on how we look at the event and Pontecorvo’s work, of getting collectively confined to the Algerian war, locked into a museum-like conception of this war and our Algerian identity. Reality is complex and we must be wary of simplistic reasoning. We tend towards a sterile opposition between modern Islam and the Islam of the Enlightenment for example. We think we can escape from present discomfort to return to a mythical Golden Age, to a supposedly better « moment » in our history. The issues however should be considered and discussed separately, first and foremost with regard to their relevance today.

Could you tell us about Yacef Saadi, this hero of the movement for national liberation who survived the Battle of Algiers and is featured in Pontecorvo’s film? Not only did he inspire the film’s script, but he also plays his own part in the movie.

MB: Yacef is indeed a real movie character. The French archives of his arrest indicate that the French authorities considered him an actor « who lacked cinematic stature ». He plays at life. He is the boss of the kasbah. He is a very interesting character. Scriptwriter Franco Solinas has done an impressive job at adapting his account of the Battle of Algiers. However, for the success of the film as a whole, the meeting between Solinas and Pontecorvo was of the greatest importance. 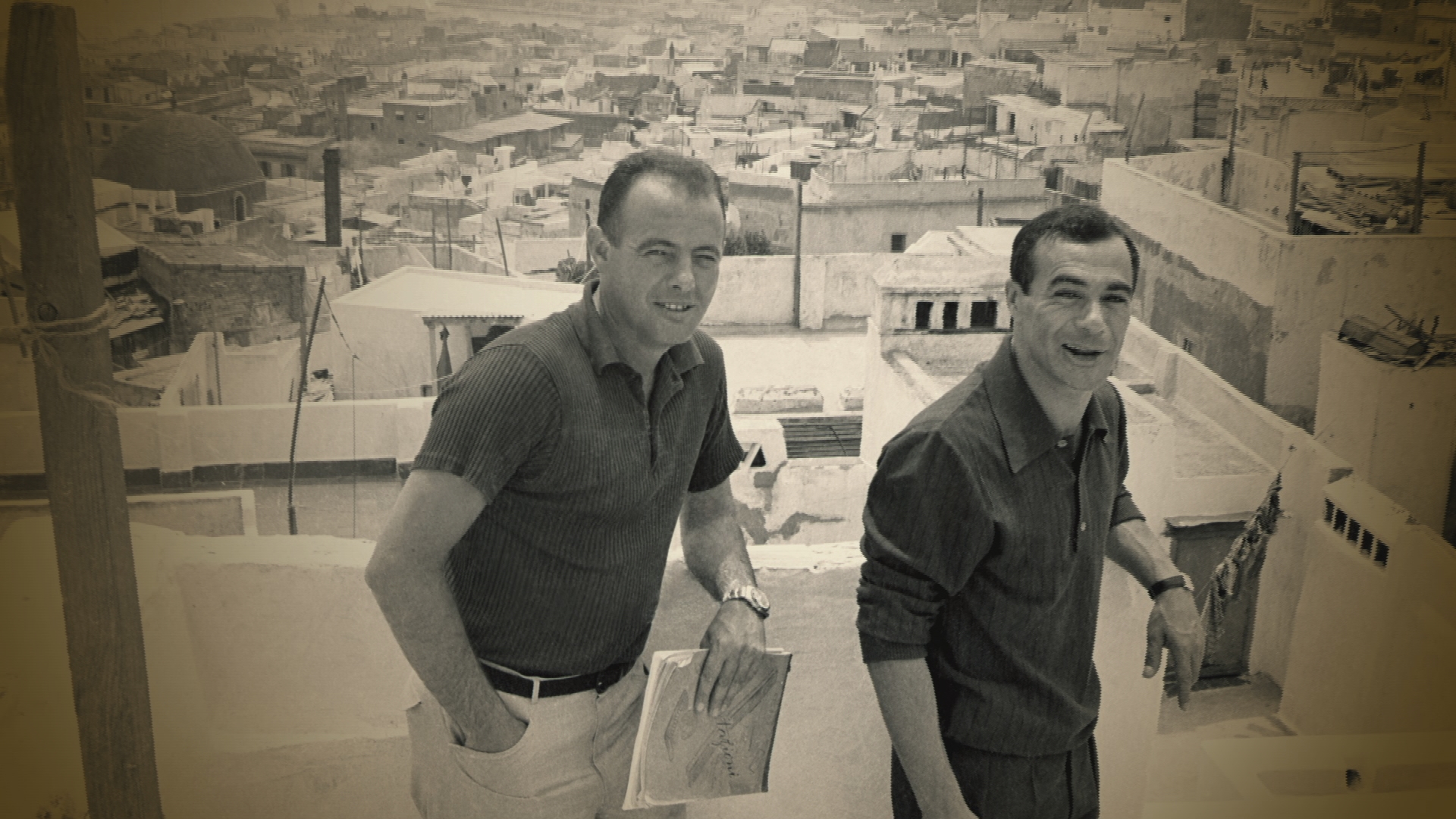 Why do you think the film was immediately so successful?

MB: The film is very well scripted. Like with Solinas’ work with filmmakers such as Joseph Losey or Costa Gavras, Pontecorvo has combined the advantages of political films and action films. First, he is very good at the dynamics of an action and adventure movie. Then, he manages to stage the confrontation between French and Algerians in a very convincing way. Both the independence movements and the French military recognized themselves, so to speak, in his staging of urban guerrilla warfare in the Kasbah. The aesthetic qualities of the film – the neo-realistic influence, especially the graininess – as well as the music (Ennio Morricone and Johann Sebastian Bach) also contributed to the film’s success. The Battle of Algiers has thus been able to win over many audiences across frontiers.

You delve into several time strata in the film. Returning to its locations and interviewing the Algerian participants allows you to shed light not only on the political issues of the past and present, but also on the mechanisms of the construction of individual and collective memories.

MB: There is a link between fiction and history. Both feed each other almost routinely. My film shows it very well. Not because of its original intention, but because the people who I talk to in the film, in particular the Algerian technicians and actors of Pontecorvo’s film, were tossed about by the winds of History before, during and after the shooting of the movie. Some experienced further suffering shortly after the shooting of The Battle of Algiers when Boumédiène came to power.

Your film ends with a contemporary Algerian hip hop song, an evocation of the martyrdom of the Kasbah hero Ali La Pointe and an illuminating quote from historian and philosopher Raymond Aron. Can you comment on these choices?

MB: The sentence is taken from Pontecorvo’s film. It is uttered by one of the actresses in the film and serves as the driving force behind the warrior myth. This war allowed us to obtain independence. One of the technicians in The Battle of Algiers tells us, « Ali la Pointe died as a martyr, so he could not be corrupted by independence ». The song by the rapper Diaz evokes the courage of Algerians who gained their independence after eight years of war. However, it also tells us to be careful not to lock ourselves in the war. We have to be careful not to lock ourselves into a repetition of history. Because of the injustices they are suffering today, young people in Algeria want their own revolution and their freedom. Not to risk dying at sea.