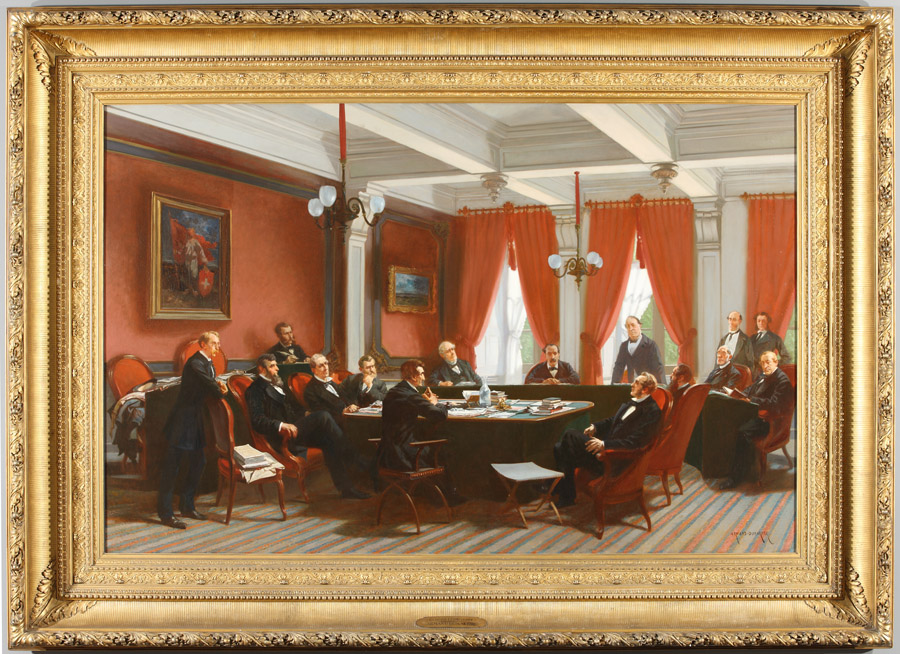 « The Geneva Conference. The Alabama Arbitration », painted circa 1873, by Charles Edouard Armand-Dumaresq.

The recent negotiations in Geneva and Zurich on Iran’s nuclear program have focused attention on the role of Switzerland as a site for diplomacy. Going back to the famous Alabama Claims following the American Civil War (1861-1865), Switzerland, especially Geneva, has hosted numerous arbitrations and negotiations – some public, many off the record.

While neutrality is certainly one of the reasons for this diplomatic specificity, it is interesting to speculate on the importance of these negotiations, particularly in light of the 200-year celebration of Geneva’s entry into the Confederation. What is peace? What is the role of diplomacy towards that end?

Peace is usually defined as the absence of war. The idealism that follows from this definition is easily confused with the absence of conflict. A successful conclusion to peace negotiations slides comfortably into a recognition of the absence of hostilities. In addition, we are tempted to imagine peace negotiations leading to a perpetual peace. If we go back to the thoughts of Henry Dunant, the founder of the International Committee of the Red Cross (ICRC) and his celebrated text A Memory of Solferino, we see the inevitability of hostility, conflict and war. According to Dunant, wars are part of human nature.

There is a significant difference between hostility, conflict and war. Political scientists expertly map a continuum from low-intensity to high-intensity conflicts and war. Whereas conflict is inevitable, we maintain, there is no logical reason why conflict has to spill over to violence. Arguments, negotiations are all part of daily life from couples to countries to cultures. We cannot agree on everything.

How arguments (conflicts) are negotiated is at the heart of Switzerland’s role. The Alabama case ended a disagreement between Great Britain and the United States. It was the first formal third party arbitration in diplomatic history. A panel of independent judges ruled on the contention; both parties accepted the decision. The fact that the ICRC’s first conventions were signed in the Alabama Room of Geneva’s City Hall is no aberration. Following international humanitarian norms is part of circumscribing conflict.

The opposite of war is not necessarily peace. It is rather the process by which conflicts are discussed among the parties. The fact that Iran and the other parties chose to meet in Switzerland to negotiate re-inforces the image of Switzerland as a place of dialogue. It is part of a long tradition. Hopefully, the celebrations of the 200-year anniversary will remind people of this tradition and the importance of the process of negotiations, arbitration and dialogue instead of outright violence.

How to negotiate with terrorists? When we speak of terrorists, we are labelling those we assume do not want to negotiate. How to establish a process of dialogue with those outside and marginalized from the accepted process? That is the current challenge. When people are labelled terrorists and put on terrorist lists it becomes illegal to speak with them. On the other hand, in many situations, such as those involving hostages, negotiations become imperative.

This is both a legal/political problem as well as a communicative one. How to negotiate with those who do not want to negotiate? How to negotiate with those who have a different set of negotiating skills? Who have a different idea of what negotiations mean? During the time of Dunant, the norms of international humanitarian law (IHL) became accepted by almost all parties to conflict. Today, with the Islamic State, Boko Haram and similar groups, the situation has changed. The challenge for peace processes, IHL and Switzerland is to see if new processes and negotiating skills can reflect the current challenges.

At the same time we proudly recognize the role of Switzerland as a center for negotiations, we are horrified at beheadings, kidnappings and other actions we consider uncivilized. If Dunant and his colleagues tried to civilize war, what can we do to “civilize” today’s terrorists? We await another Dunant, IHL 2.0.

Beautiful memories of “The Battle of Algiers”