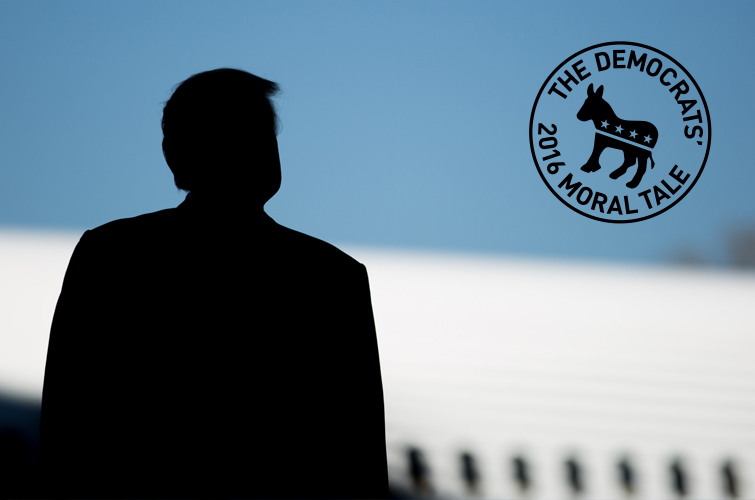 President Donald Trump in North Charleston, SC, during the rollout of the Boeing 787-10 on February 17, 2017 © City of North Charleston / Ryan Johnson (edited by Jet d’Encre)

The third phase of the election year lasted from November 8, 2016 to Donald Trump’s inauguration on January 20, 2017. It is no understatement to say that nobody expected Trump to win. He had been continuously behind Hillary Clinton in the polls. As it turned out, he won the Electoral College (306 to 232) but not the popular vote in which he was behind Clinton by about 2.9 million votes. The previous article discussed the moral rationale of voters who refused to vote for Clinton and voted for Jill Stein instead. This third article of the series discusses how Clinton’s defeat and its aftermath was integrated into the moral narrative of the election year.

Blaming everyone but themselves

After an unexpected event like Donald Trump’s victory, it seems natural that there should be a scramble to try to make sense of the result. Various explanations appeared that were biased according to ideological outlook and placed moral blame on Hillary Clinton and the Democratic Party.

Naomi Klein wrote an opinion in The Guardian with the following title: “It was the Democrats’ embrace of neoliberalism that won it for Trump” In this piece, Klein rejects a list of factors that are not traceable to flaws within the Democratic party and arbitrarily singles out one explanation for the election loss: “They will blame James Comey and the FBI. They will blame voter suppression and racism. They will blame Bernie or bust and misogyny. They will blame third parties and independent candidates. They will blame the corporate media for giving him the platform, social media for being a bullhorn, and WikiLeaks for airing the laundry. But this leaves out the force most responsible for creating the nightmare in which we now find ourselves wide awake: neoliberalism.” By making a pact with the neoliberal devil, the Democrats lost their soul and the presidency.

In Counterpunch, Paul Street partly attributes Trump’s victory to the: “(…) transparent moral depravity and corruption among two of its three top contemporary personalities: Hillary and Bill (he of the infamous crooked gubernatorial and presidential member) Clinton have in fact been “crooked” (Trump was sadly right about that) from the beginning of their political careers in Arkansas (…).”

For Glenn Greenwald, writing in The Intercept, it is the moral corruption of western elites that is to blame for Clinton’s defeat. Western elites were responsible for the impoverishment and alienation of voters who exacted their revenge in the two protest votes of 2016: the Brexit vote and Trump’s election. In the US presidential election: “Democrats knowingly chose to nominate a deeply unpopular, extremely vulnerable, scandal-plagued candidate, who — for very good reason — was widely perceived to be a protector and beneficiary of all the worst components of status quo elite corruption.”

The recurring theme with Naomi Klein, Paul Street and Glenn Greenwald is that moral corruption and depravity was still at work when the Democrats tried to make sense of their defeat. These moral flaws explain both why they lost in 2016 and also why they refused to admit their own responsibility for the loss. The Democratic Party sinned in the primaries when they suppressed Bernie Sanders and they have also been sinning since the 1990s when they promoted mass incarceration, free trade and financial deregulation. These sins could not go unpunished for ever, hence Clinton’s surprise defeat on November 8, 2016. Why the Republicans and their own proximity to big business and past promotion of free trade did not attract a similar punishment is not explained.

No blaming the Russians!

The refusal to allow narratives that were not purely moral in nature explains the response to the Russian hacks. On July 22, 2016, just before the Democratic Convention, WikiLeaks dumped 19’000 emails1 that had been hacked from the accounts of several top personalities in the Democratic Party. The emails showed a genuine lack of neutrality in top Democratic officials in favor of Hillary Clinton. On July 24, 2016, Debbie Wasserman Schultz was forced to resign as chairperson of the Democratic National Committee because of her bias for Clinton. The leaks caused a staged walk-off of Bernie Sanders supporters from the convention floor after Clinton won the nomination.

The narrative according to which the Democratic Party is run by arrogant elites who would do anything to crush a progressive candidate came to be confirmed by the bias found in the leaked emails. The leaks thus served a moral purpose in the story by constituting proof of the accusations made against the Democrats.

There is no role in this narrative for an agent who is hostile to the integrity of US elections, such as the Russian government or WikiLeaks: “The demonization of Vladimir Putin is rigged. Nobody has seen evidence that he or his government did us the favor of informing us of the DNC’s corruption.” By denying the role of any other agent for the leaks, responsibility is left to fall solely on the shoulders of Clinton and the Democratic Party. They brought their defeat upon themselves by betraying progressive voters: “Putin didn’t lose the election for Hillary. Obama did. People wanted change, and they didn’t get it (…)”.

It doesn’t matter who hacked the Democrats, the only fact of importance is the refusal of the party to accept its own responsibility for the loss. For Greenwald the Democrats had a “self-exonerating mentality”, a “self-entitlement syndrome” and their “renowned strategic geniuses were blinded with arrogance and error”.

If Russia or WikiLeaks were allowed to play a role, the story would lose its moral mechanism of sin and punishment. This explains Greenwald’s aggressive rejection of the CIA’s assessment that Russia interfered in the election: “Democrats — still eager to make sense of their election loss and to find causes for it other than themselves — immediately declared these anonymous claims about what the CIA believes to be true”. The Democrats were to blame for their loss and they were also to blame for attributing their loss to Russian interference.

The greatest sin of all

Before election night, Bernie Sanders and his supporters were the victims of Hillary Clinton. Since November 8, 2016, the pool of her victims has multiplied: it is everyone who didn’t want Trump to be president. If Sanders was cheated out of the nomination and if he had a real shot at winning the election against Donald Trump, then Clinton is to blame for Trump winning the presidential election. The following opinion piece headlines could not be more explicit on this point: “No, Hillary. President Trump Is Your Fault”,  “Hillary Clinton blew the most winnable election in modern American history. And it’s her own fault.” and  “Democratic Elites Still Can’t Grasp That Sanders Would Have Won in a Landslide”.

This view is the conclusion of a narrative in which Clinton and the Democratic Party’s immorality and actions are the only causal factors in the election. There is no role for any other factor, not for the Russians, not for the FBI, not for the Republican Party, not for third party voters and not even for Trump voters. Clinton is made to carry the cross of Trump’s victory alone.

The story lacks a moral ending

Because the Democrats have been incapable of finding any fault within themselves and have preferred to blame anything or anyone else for their loss, the moral universe has not regained its equilibrium. Due to this lack of repentance, the moral story will persist and the Democratic Party will carry its guilt into future political events.

In the 2018 mid-term elections and in the presidential election of 2020, the moral narrative will continue with regards to the Democratic candidates. The Green Party will claim that the lesser evil paves the way for the greater evil. Susan Sarandon will exhibit her impeccable moral beliefs with a total disregard for reality. The Bernie Sanders supporters of today will warn of a repetition of the punishment of the Democratic Party if a genuinely progressive candidate is not nominated. Moral depravity will be either punished or unfairly rewarded depending on who wins and loses future elections. Finally, factors that do not fall perfectly into the moral structure of the narrative will be completely ignored.

1 The leaked emails had been stolen in spring 2016. Several cyber security companies pointed to Russian intelligence. In December 2016, the CIA claimed to have information indicating a deliberate attempt by the Russian government to help Trump win the White House by hacking the Democratic Party.

Cultural Appropriation: A Guide for the Perplexed