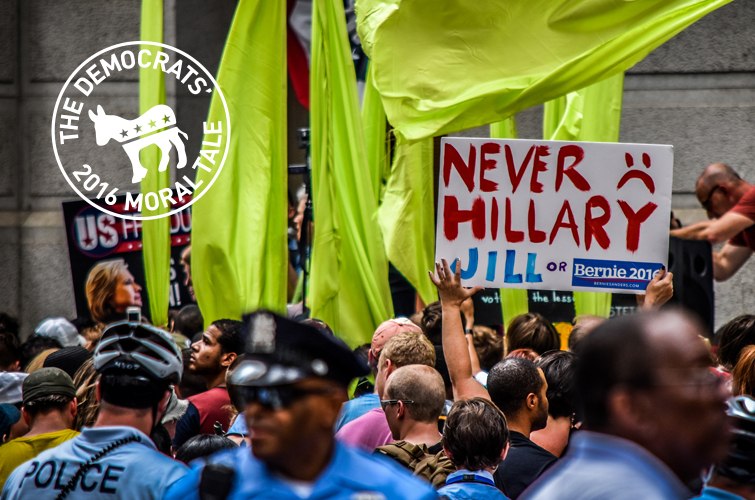 The general election is the second phase of the election year. It started with the end of the primaries and ended on November 8, 2016. If Bernie Sanders officially got behind the Hillary Clinton campaign, the same cannot be said of all his supporters. Why, if several of Sanders’ progressive policies got integrated into the official platform of the Democratic Party, could some of his supporters still not vote for Clinton despite the risk of a Donald Trump presidency? The previous article discussed the birth of the moral narrative during the democratic primaries. This second article (following Hillary Clinton’s Original Sin) discusses how this narrative developed during the general election as voters were given the choice between Clinton, Trump or a third party candidate.

The lesser of two evils

The US bipartisan system is a product of the electoral rules as set out in the US Constitution. In the general election, the candidate with the most votes in a state gets all of its electors. As a result only the major parties can ever hope to see their candidates elected, the smaller ones get left out in the cold. The system lowers the number of candidates with a chance of winning.

The concept of the lesser of two evils is an answer to the narrowing of options available to voters. A voter who disapproves of both major candidates is nonetheless forced to vote for the candidate who is comparatively closer to her own views if she wants her vote to influence policy. In the 2016 election, a progressive voter would thus have to vote for Clinton, although she doesn’t support her, because of the fear of a Trump presidency. In this scenario, Clinton is the lesser of two evils. The other option is to reject both the bigger evil and the lesser evil and to vote for the candidate of a third party who is more palatable but doesn’t stand a chance of winning. In that case the voter can follow Ted Cruz’s advice to “vote your conscience”.1

Noam Chomsky argued against voting for a third party candidate in 2016. For him, voting should: “not be viewed as a form of personal self-expression or moral judgment directed in retaliation towards major party candidates who fail to reflect our values” but rather: “The exclusive consequence of the act of voting in 2016 will be (if in a contested ‘swing state’) to marginally increase or decrease the chance of one of the major party candidates winning.” In short, a Trump win is worse than a Clinton win, thus voters should not waste their votes in order to make a moral point but should vote to avoid the worst outcome.

Not everyone agreed with Noam Chomsky. Jill Stein, the Green Party’s presidential candidate, used the concept in her slogans: “Jill Stein the greater good not the lesser evil”. She became the candidate for the Bernie Sanders supporters who could not get themselves to vote for Hillary Clinton. For Stein, the only moral option was to vote for her rather than a flawed major party candidate. She argued the opposite of Chomsky: “If you can’t put your values into your vote, we don’t have a democracy.” She also argued that the Democratic Party was blackmailing people to vote for them: “They rely on fear. They don’t want you to vote your values. They need to use the scary tactic of, ‘Oh, the other guy is worse.’” According to Stein, the Democratic Party used the fact that it was better (or less evil) than the Republican Party as a scare tactic.

When Sanders conceded to Clinton, Stein issued a communiqué in which she praised Sanders and attacked the Democratic Party for sabotaging his campaign: “we can’t have a revolutionary campaign inside a counter-revolutionary party.” Stein called to keep Sanders’ revolution going and appointed herself as his successor. It is interesting to note that Sanders never called for his supporters to vote for Stein.

Clinton was more often the target of Stein’s rhetoric than Trump was. For example: in an opinion published in The Guardian in October 2016, Jill Stein and Ajamu Baraka (her pick for vice president) discussed both Trump’s and Clinton’s flaws. It is remarkable that only one paragraph of this text was devoted to Trump while Clinton and the Democratic Party got five scathing paragraphs of criticism.

The Green Party positioned itself as a counterweight to the Democratic Party and barely concerned itself with the Republican Party. In the same text, Stein and Baraka bemoaned the fact that Trump was an extreme candidate but only because that caused people to be less critical of Clinton: “Sadly, Donald Trump’s self destruction has provided a smoke screen for those on the left and the more moderate elements on the right who might ordinarily question Clinton’s unabashed cheerleading for a continuation of these modified Cold-War strategies.”. When the two Green candidates discussed Trump it was mainly for the purpose of attacking Clinton.

Why was the Democratic Party the principal target of the Green Party’s campaign rhetoric? As a progressive, environmentally concerned movement, one would think that they might have spent more time and energy attacking the Republican Party whose members deny the human role in climate change (if not climate change altogether). Instead, the Green Party attacked the Democrats, whose last elected president signed the Paris Agreement to combat climate change. The answer lies in political expediency: Stein’s audience was composed of progressives and the Democratic Party is the most important vehicle of progressive change in US politics. So that was where the Green Party could hope to poach electors rather than from the ranks of the GOP. Her reference to the lesser of two evils used moral language but her aims were anchored in political reality.

It made political sense for Stein to attack Clinton because she was attempting to get the Green Party to gain more ground in US national politics. But what motivated Green Party voters? Some people were genuinely attached to the Green Party and/or to Stein but for others, voting for Stein became a second best after Sanders’ withdrawal. The indignation for the perceived cheating in the primaries caused a desire to punish Clinton and the Democrats. These voters could not have cared about the result of the election: they neither supported the Green Party before Sanders withdrew nor did they feel compelled to block Trump. The act of voting acquired a purely moral significance, free of any practical consideration. Susan Sarandon embodies a shining example of such voters.

Susan Sarandon: driving off the cliff of moral purity

Unlike Jill Stein, Susan Sarandon makes no sense if we are looking at politics as a process that delivers actual policies that affect real people. Rather, politics is an opportunity to signal one’s moral views to the world. If Sarandon’s political outlook is not rational in terms of practical results it cannot be said to be absurd either. In 2016, Sarandon was not taking any personal risks: she is a wealthy white woman, who does not need Obamacare, she is not facing deportation, she is not a Muslim and she will not need access to contraception or abortion any time soon. As such, her voting behavior was not self-defeating because she was not going to feel any of the negative consequences of a Donald Trump presidency. Rather than being absurd, her voting choices were politically inconsequent.

On the BBC, Sarandon stated that her goal was to help the Green Party pass the threshold of 5% that would allow it to receive federal funding in subsequent elections. Why, then, did she support Sanders during the primaries? Sarandon switched to Stein only after his defeat. Had Sanders won the primaries, Sarandon would have enthusiastically voted for him as the Democratic candidate. Her motivation cannot have been to support the Green Party and must have had a different source. In fact, the rejection of Clinton seems to have been her primary motivation.

Sarandon declared on the BBC, shortly before election night, that: “I don’t vote with my vagina”. She had already used the expression on Twitter in February 2016, to justify her support for Bernie Sanders: “I don’t vote with my vagina. It’s so insulting to women to think that you would follow a candidate JUST because she’s a woman.” Her point seems to have been that female supporters of Clinton were only motivated by the fact that she also has female genitalia. These remarks by Sarandon are indicative of a concern for Clinton as a person (in body and mind) since even the candidate’s gender was problematic to her.

When Sarandon endorsed Stein, she provided a list of reasons for doing so. Her attention was again focused on Clinton: she gave eleven reasons for rejecting her. The act of voting was thus narrowed down to an act of judgment applied to one single individual. Sarandon used the same expression as Ted Cruz and believes people should: “vote their conscience”. Her conscience was solely preoccupied with a rejection of Clinton and not, for example, with the consequences of the election for the country.

This disregard for consequences was apparent when Sarandon declared, on MSNBC, that: “Some people feel that Donald Trump will bring the revolution immediately, if he gets in. Then things will really, you know, explode” The theory that a Trump administration would bring about a revolution is seriously defended in a few circles on the far left such as the Counterpunch website and by Slavoj Žižek who viewed a Trump victory as an opportunity to mobilize the left.

The plausibility of this theory is of no importance, however. What Sarandon was doing when she referred to the prospect of “things exploding” was defending her rejection of Clinton to the extent that she was prepared to quote a revolutionary fantasy. Sarandon wanted Clinton to lose, regardless of the consequences. This does not mean that she actively desired a Trump presidency but she was forced to address it because that was the only possible consequence of a Clinton defeat. Why Clinton, also evil, also disastrous, would not bring about the revolution, why things would not “you know, explode” was not addressed by Sarandon. In this solipsistic moral universe, policy didn’t exist, only her, the purity of her beliefs and the desire to project them to the world.

The moral narrative integrated the surprise defeat of Clinton on November 8, 2016. She and the Democrats came to be viewed as having been dramatically punished for their wrongdoing. The next article discusses how factors explaining Clinton’s defeat without reference to her immorality were aggressively rejected from the narrative.

1 The implications of a third party vote received a lot of attention after the notoriously close presidential election of 2000, when George W. Bush won the state of Florida against Al Gore by only 573 individual votes. That year’s third party candidate Ralph Nader won 97’488 votes in Florida. It is undeniable that in that case, voting for a progressive independent candidate (Nader was the candidate for the Green Party) rather than for Al Gore led to a conservative outcome: G.W. Bush became president because he got all the electoral votes for Florida allowing him to win the electoral college nationwide.