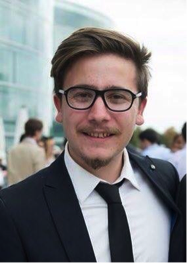 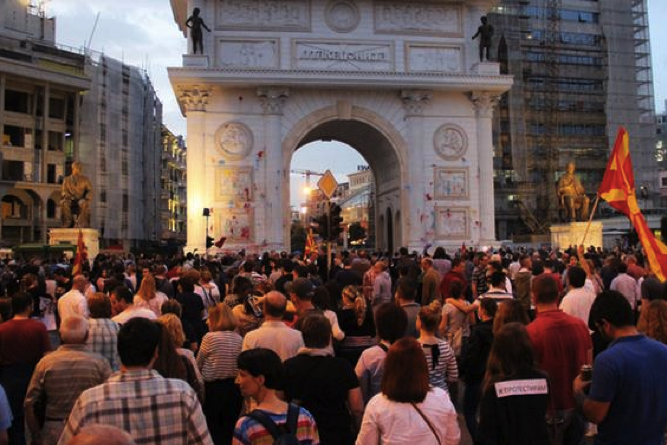 There is a great symbolism behind the act of identifying a revolution with a color, flower, season, or even bulldozers – as it was once the case in Serbia. It gives the civil unrest a specific identity that can easily travel across borders, and hopefully (for the protesters) its due place in the history of revolutions. Symbolic names are not the only characteristic of these modern revolutions and protests. Another one is that they were often accompanied by counter-revolutions and counter-protests. What came to be known as Maidan revolution in Ukraine in 2014, was confronted by anti-Maidan movement1; the 2013 Gezi Uprising in Turkey led to counter-Gezi rallies in Istanbul and throughout the country2; the 2012 Orange movement in Russia (in a reference to the Ukrainian Orange revolution of 2004-2005) was confronted by the anti-Orange movement.3

The recent demonstrations in the streets of Skopje – the capital of Macedonia – added another interesting name to the list of colored revolutions (as they came to be known): the ‘Colorful revolution’.4 According to the protesters, this name symbolizes the pluralism that they promote vis-à-vis the ‘greyness’ created by the politics of the current government. However, as it happened in the other cases that I mentioned above, the Macedonian ‘colorful revolution’ is confronted by a strong counter-revolution that has the support of a huge part of the population.5 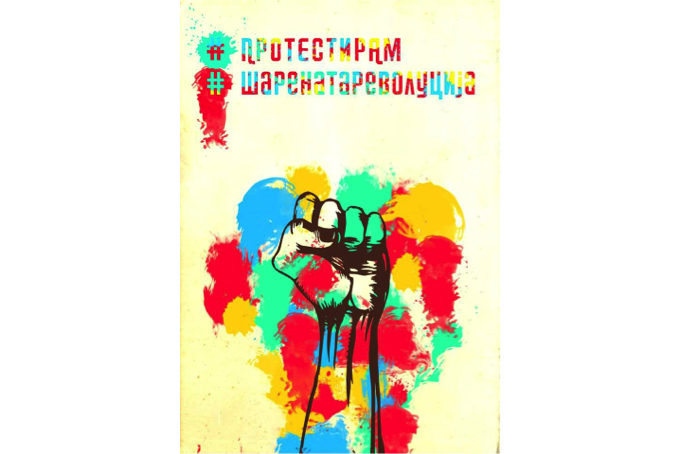 The fist as a symbol of the Colorful Revolution

One crucially important question that emerges here is why we see this kind of strict division in the populations of the countries that experience huge demonstrations and revolutionary movements. While colored revolutions were glorified in the Western media, counter-revolutions are often portrayed as driven by political allegiances, clientelism or nationalism.6 This kind of conclusion is however shallow and neglects many factors, including the fact that not only the political arena, but also the psychological-identitarian arena is open to contestation during colored revolution. I think that a study of the recent events in Macedonia can give the answer to this question, or at least it can provide us with directions for further analysis.

Let’s start from the protesters’ camp. The call for government’s resignation is the most commonly heard thing in the streets of Skopje these days.7 Demonstrators talk openly about corruption, but also about their fear and insecurity, claiming that they are being constantly oppressed by the government and their human rights are reduced to almost nothing. “The regime is completely homophobic, and we are marginalized”, said one young man protesting the treatment of LGBT people, as another one added: “We are not standing, we are drowning.”8 The protesters even put a symbolic gravestone in front of the National Assembly with ‘Human Rights’ written on it, indicating the insecurity and fear that their rights are being ‘killed’ by the government’s policies. 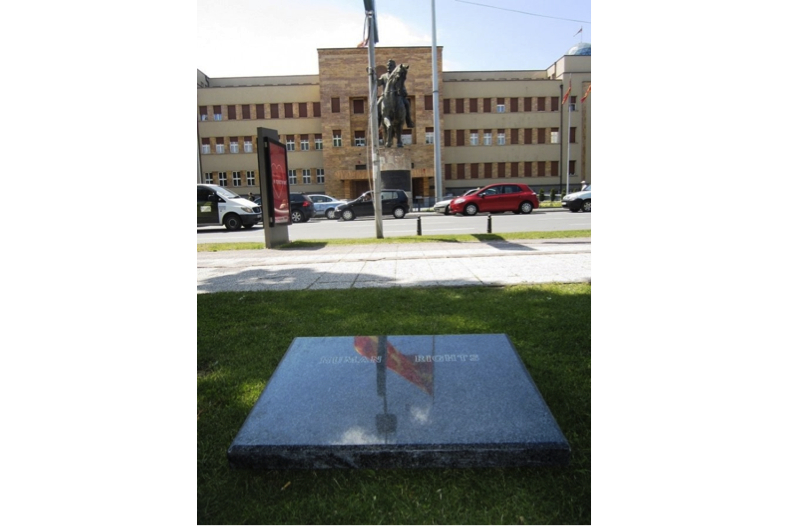 Symbolic burial of Human Rights in front of the National Assembly

‘Human security’ is a relatively new concept that can describe at least some of the demands of the protesters in Macedonia. This concept is new in the sense that it is concerned with the security of the people and the rights of the individual (including survival and dignity), rather than the security of the territorial state.9 In other words, human security is an effort to construct a global society where the safety of the individual will be the top priority of the institutions of global governance, and where those who violate this safety will be held accountable by this system. Put shortly, the safety of the individual prevails on the safety of the state, and therefore, the latter can be disregarded if ‘human security’ is violated by the state. That is exactly why during this kind of revolutions the demand for human security is seen as contrary to the national interest and national security. This criticism is even more intense when protesters call for international intervention to protect them from their own government, or when human security becomes a widely defined ideological instrument used (and abused) for defying the legitimacy of the national government. During the 2013 Gezi Uprising in Istanbul, for instance, Erdogan was making an assertion that a ‘banal’ thing, such as people’s right to public space (park) was abused in order to challenge the Turkish national security.10

The concept of human security is still not very popular among the people, and not fully accepted by everybody, especially in the multiethnic states of Eastern Europe. Human rights are not usually seen as a condition for security. Security is gained collectively.11 Human rights, on the other hand, are seen as an individualistic concept. A majority of the people see their own security within the context of the national security.

This is exactly one of the main reasons behind the counter-revolution in Macedonia, and in other similar cases in Eastern Europe. The whole story about the ‘colorful revolution’ became very symptomatic when the protesters started attacking the monuments that for many people symbolize the history of the nation and its distinctive national identity (by using the argument that they symbolize the corruption of the government). This led to the gathering of thousands of counter-protesters to march against the ‘colorful revolution’ and to reject it as contrary to the national interest, national security and therefore as contrary to their own safety. The reason for that is the fact that national security is considered as being dependent on a strong national identity. The concept of the nation state is understood in ethnic rather than civic terms, especially in the post-communist countries of Eastern Europe. Consequently, the legitimacy and the existence of the state depend heavily on a strong national identity that has the capacity to clearly define the nation. Many people fear that they will lose their own safety once their national identity is challenged (through the desecration of monuments) and thus the security of the state is put in danger.

The protesters’ demand for greater human security, in other words, threatens the security of the national identity (and therefore, the national security), according to the counter-protesters. The constant interference by Western governments in the events in Macedonia12 13 intensified counter-protesters’ fear about their state’s and their own security. Their critical argument is that the ‘colorful revolution’ is just another colored revolution imported from abroad, whose main aim is to defy the distinctiveness of the Macedonian national identity and, therefore, to challenge the security of the state.14 One counter-protester said: “We are here to defend our country. It’s time we stand up against this dark foreign scenario.”15

The unfolding of events in Macedonia shows that the concern for national security can mobilize a huge group of people on the counter-revolutionary side in a similar way as the concern for human security can mobilize people on the revolutionary side. The first group identifies their own security and interests with the security and interests of the state. This same scenario was evident in other countries, as well. Expressing his gratitude to the anti-Orange activists in 2012, Putin said: “Organizing an event in support of the authorities is somewhat different from other similar actions. The people participating feel a threat to their interest, the threat of losing something. But that’s exactly why they come out to voice their position.”16 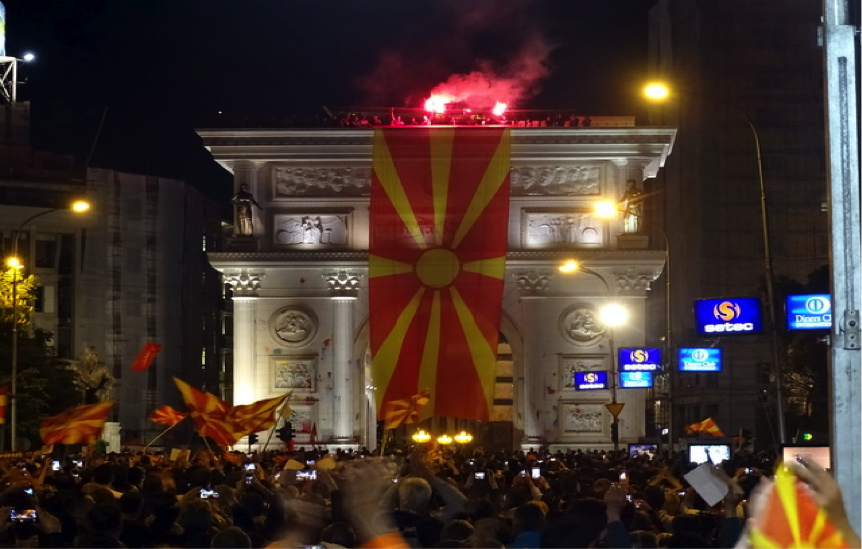 To sum up, human security is a relatively new concept in security studies. Its relation to national security is not very well studied yet.17 The colored revolutions and counter-revolutions in Eastern Europe provide us with good case studies for analysis of these seemingly conflicting concepts. The comparison of these two conceptions of security, on the other hand, has the potential to explain the reasons behind the emergence of counter-revolutions in the Eastern European countries that have been stricken by revolutions. The big question in front of us is how to reconcile these two understandings of security. Is there any way that protesters can demand greater human security without making it look like they challenge the national security? Having two huge crowds with different concerns about their safety can be problematic and even lead to an armed conflict and atrocities. Let’s hope it won’t be the case in Macedonia.

[17] Trobbiani, Ricardo: How Should National Security and Human Security Relate to Each Other?”, 26.04.2013, Available: http://www.e-ir.info/2013/04/26/how-should-national-security-and-human-security-relate-to-each-other/

A name hypothesised for such an event was "Grape Revolution" because of the abundance of vineyards in the country; however,…

A name hypothesised for such an event was « Grape Revolution » because of the abundance of vineyards in the country; however, such a revolution failed to materialise after the governmental victory in the elections. Many reasons have been given for this, including a fractured opposition and the fact that the government had already co-opted many of the political positions that might have united the opposition (such as a perceived pro-European and anti-Russian stance). Also the elections themselves were declared fairer in the OSCE election monitoring reports than had been the case in other countries where similar revolutions occurred, even though the CIS monitoring mission strongly condemned them.